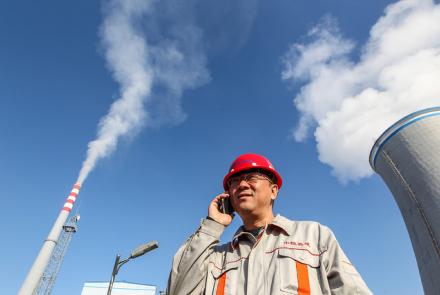 Frank Jotzo is Director of The Centre for Climate and Energy Policy at Crawford School, and director of the School’s Resources, Environment and Development program. He currently teaches the graduate courses Domestic Climate Change Economics and Policy and Issues in Development and Environment.

On the outer
Pressure on Australia to clarify climate stance as US and China move.

China’s target is a 60 per cent to 65 per cent reduction in the emissions-intensity of the economy by 2030 pegged at 2005 levels, with carbon dioxide emissions peaking around 2030, perhaps earlier. China has also pledged to increase the share of non-fossil fuels to 20 per cent of total energy use and a large increase in forest carbon stocks.

The emissions-intensity target means reducing the ratio of carbon dioxide emissions to GDP by 60 per cent to 65 per cent, or conversely, increasing the amount of economic output per tonne of carbon by almost two-thirds. It’s the only new commitment in addition to what China pledged at a joint announcement with the US at last year’s APEC meeting. And it packs some punch.

Decarbonisation and how to do it

What it means is that China aims to continue until 2030 the rate of decarbonisation targeted for the 2005 to 2020 period — around 4 per cent per year. This target will require strong action to improve energy productivity and shift to zero-carbon energy sources.

Such a pace of cleaning up economic growth has rarely been achieved elsewhere over a significant period of time. The decarbonisation rate in the US since its emissions peak in 2007 is 3.3 per cent per year, and this has included an unprecedented boom in cheap gas. EU carbon dioxide emissions peaked in 2002, and its collective emissions intensity declined by an annual average of 2.2 per cent during the following ten years. The main historical precedent for decarbonisation rates above 4 per cent per year over extended periods of time are Russia and other parts of the Eastern bloc following the 1990s collapse of Soviet-era industrial structures.

The long list of actions listed in China’s INDC is a fair indication of the magnitude of the task, and it is an sign of the resolve of the Chinese Government. They range from higher efficiency in coal use and a limit on the total amount of coal; fast development of solar, wind, hydro, nuclear and gas; energy efficient and low-carbon industrial systems; and cutting emissions from buildings and transport. The actions also include broader support for R&D, low-carbon growth patterns, a strong commitment to national emissions trading and to ‘make the market play a decisive role in resource allocation’.

Yet China could do better still. China is likely to outperform the 2020 target, given that average annual reductions from 2005 to 2014 were 4.5 per cent, as reported by Beijing. Energy productivity greatly lags that of advanced economies. Enormous gains can be made by further improving technical efficiency and by accelerating the shift in economic structures away from energy-intensive industries. And China will continue to shift its energy mix away from coal and towards nuclear, gas and renewables, and also towards reducing the emissions-intensity of every unit of energy used.

Fundamental changes in the factors that drive China’s greenhouse gas emissions are already happening. Total coal use in China fell in 2014 compared to 2013 (on the basis of preliminary data). This is partly because industrial output such as steel has leveled off, heralding the ‘new normal’ of Chinese economic growth. The era of extremely rapid expansion of infrastructure is coming to an end and the sources of economic growth are shifting to less resource-intensive activities.

Alongside structural changes, China is achieving rapid improvements in the efficiency of energy use. New coal-fired power stations are still being built, but they are state of the art and are replacing old inefficient plants. Industry, road transport and buildings are all getting more efficient and there is huge potential for further improvements. Add to that the push for the expansion of hydroelectricity and nuclear power, as well as solar and wind plants, all of which are beginning to make a dent in China’s energy supply.

China’s emissions turnaround is driven partly by circumstance and partly by a strong policy effort. That effort is not being undertaken out of altruism for the global climate but for solid reasons of national self-interest. A lower carbon trajectory has tangible short to medium-term benefits for China, as I explained in a recent paper with my colleague Teng Fei from Tsinghua University.

A flat and early peak?

It all adds up to the prospect that China’s emissions could peak well before the target date of 2030, as argued recently by Nick Stern as well as Ross Garnaut. Many experts see a peak in the first half of the 2020s as possible, and some think it could happen even earlier.

Ultimately, what matters much more than the date of the peak is the level of China’s emissions over years to come. ‘Peaking’ invokes images of a rapid increase in carbon emissions, then a turning point followed by a rapid decrease. But the historical experience is that countries’ emissions trajectories simply flatten out, and the peak is a point not much higher than many others on a drawn-out plateau. The profile looks more like Mount Kosziousku than Mount Everest.

The climate pledge submitted this week does not give an estimate of that level, because it depends on the future growth rate of China’s GDP. But that growth rate is slowing, and it could be that emissions levels will rise only gradually in coming years before a peak. That would be very good news for the climate.

This piece was first published by The Interpreter: http://www.lowyinterpreter.org/post/2015/07/01/China-makes-formal-climat...